Hindsight has both benefits and drawbacks.

If only we had invested a couple of Millions in gold in the third week of March and sold it in the second week of April, we could have turned a cool quarter Million in profit! If only … such is the plight of speculation – simply getting the timing right! And, of course having that amount of idle cash laying around for just such an opportunity. Fortunately, or perhaps unfortunately, that dilemma seldom presents itself to most of us. 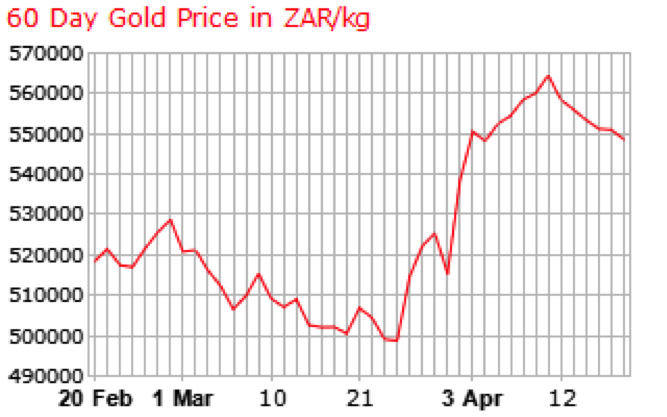 But a number of investors did make a truckload of profit during that period. What we don’t know is how much they lost during other periods when they got the timing wrong! Sure, there may be a quick buck to be made but we all know that within short-term speculation, lies the potential of a quick win, which is also equal to the potential of a quick loss. Here’s the reality … investors that stay in the market for the long haul are reaping the reward. Thirteen years might sound like a long time but if we had held out, we could have made a 565% return on our gold investment. Take the same investment of R2 million (albeit worth more back then) and our gold would be worth R13.3 million in today’s money.

A glance at the chart above rapidly reveals that right now the price of this precious metal is on a gradual slide … not such good news if we are already invested – however, good news if we are thinking of getting into the market. Hold on … perhaps we should wait a while, on the possibility that the price may drop further … or perhaps not! Maybe there will be an unforeseen spike tomorrow … and we will berate ourselves for not having taken the plunge. It’s always a tough call and the lament of ‘if only’ is of little consolation.

However, as a hedge against inflation and currency fluctuation, the allure of gold remains untarnished. And it has been revered as a commodity of value for a long time … in fact, over 3500 years.

Nearly as ancient as gold in the timeline of history, is the cowrie shell, Cypraea Moneta, millions of which have been excavated from the tombs of the Pharaohs.

1742 drawing of shells of the money cowry, Cyprae Moneta

As fixated as we in the west are on the enduring value of gold and silver, the cowrie shell has been used as an exchange currency longer, by more people and over a greater geographic area than precious metals. The cowrie shell is a product of the Indian Ocean – the principal source was the Maldive Islands. For centuries, shell money in the form of cowries was used as legal tender until the mid 20th century. And their use was widespread, being legal tender in countries such as India, China, South East Asia, Middle East and Africa.

What was it about cowries that led to their use as a form of currency? Simply, the same five characteristics exhibited by coins and gold – they are portable, durable, divisible, easily recognized and hard to counterfeit.

Back in its heyday, the largest part of cowrie production came from the Maldive Islands and was exported by local seamen to the main distribution center of Bengal. Large shipments of cowry shells were also sent to some of the English ports for reshipment to the slave coast before the abolition of the slave trade. As the value of the cowry was much greater in West Africa than in the regions from which the supply was obtained, the trade was extremely lucrative. In some cases the gains are said to have been 500%. The value of the cowrie was determined by the law of supply and demand. In areas far away from production or trade centers, a few cowries would buy a cow whereas in the Maldives itself a few hundred thousand equaled a gold dinar.

Along the northeast trade route, caravans of Arab traders introduced the cowry in the African inland but it was the Portuguese, English, French and Dutch who promoted the cowry to the currency for commercial transactions, using it to trade in slaves, gold and other goods. However, the massive import of cowries along the African Westcoast caused a few disruptions both sides of the trade route. Whereas India had to deal with serious shortages in the 17th century, local African currencies lost their values or even disappeared completely in favour of the cowries.

The cowrie has been used as a staple of trade for so long that its image forms the Chinese pictograph for money. In central Africa, it was still possible to pay ones’ taxes in cowries in the early 1900s and to purchase small items at market well into the 1950s. Today cowrie currency only retains value in the memory of certain West African countries or in museums dedicated to money.

To commemorate the Cyprae Moneta as the most widely used and longest lasting currency, Metcon has launched its first bullion product in the form of 24 carat gold, fine silver or 99.95% platinum. The beauty of this precious currency formed by nature has been re-created as perfect representations of their iconic predecessors, perfectly portraying the money cowrie used centuries before. Because they are identical in shape and size to the originals, they are reasonably priced and easily handled, making them special gifts from the annuls of time.

The first practical “coin” outside of China where the weight and purity of the new currency was accepted without question was stamped in Cappadocia around 2200BC. Since then many currencies have come and gone. Among the most stable and long lived with widespread acceptance have been the Roman solidus, the Italian florin and the British pound sterling (with 22.5 troy grains of silver) which became the most stable currency and the staple of international finance for several hundred years.

As the timeline of monetary evolution moves forward the world has recently seen the emergence of an intangible medium of exchange. In 2009, a cryptocurrency named Bitcoin was released as open-sourced software representing an electronic payment system. It has been described as a 21st Century form of cowrie currency with a number of characteristics in common with gold. Currently, there are between 2.9 million and 5.8 million unique users actively using a cryptocurrency wallet, most of them using bitcoin which is the largest of its kind in total market value.

The system is peer-to-peer, and transactions take place between users directly, without an intermediary. These transactions are verified by network nodes and recorded in a public distributed ledger called the blockchain, which uses bitcoin as its unit of account. Since the system works without a central repository or single administrator, bitcoin is called the first decentralized digital currency.

As a 13th-century medium of exchange, Cowrie shells were a fairly effective currency at a time when there was no risk that people might hoard them in order to speculate on their value rising. If 10 cowrie shells bought a cow, there wasn’t any risk that some farmer would try to corner the market and push the price of cows up in order to become rich. There was no need for a Central Bank of Cowrie.

Bitcoin is a great advance, so long as it is just used as a medium of exchange for virtual goods. Users pass them between each other for goods and services online. In this mode, it is a sort of cryptographic cowrie shell for virtual cows. However, when a few “leak” out into the real world, people attempt to guess a fair value, which exposes its lack of rigour because there’s nothing to keep Bitcoin liquid. It is more like gold, which all the nations abandoned as an exchange standard decades ago for the very good reason that it leads one into recessionary patterns – such as when people hoard it in the hope that the price will go up, and people buy it because they hear the price is going up, and then … yes just like the example of investing in gold that we described at the beginning.

Is Bitcoin waiting to write the final chapter in the history of money – or will the inhabitants of the darknet find a way to destabilize its integrity? Although Bitcoin protocols make it almost impossible to counterfeit, hackers and other underworld manipulators of cybertechnology may soon worm their way into the system. Perhaps we may once again be forced back to the safety of the humble cowrie or the security of gold bullion. Whilst less easy to transact, both provide a reassuring tangibility plus the allure of attractive appearance.